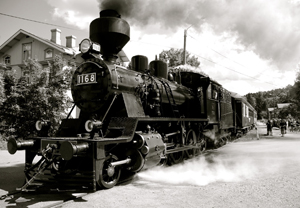 This image of a steam locomotive was taken by vestman on Flickr and shared through Fotopedia. Although taken in 2008, the steam engine represents a much earlier era, the exciting capitalist railroad dreams of the 19th century.

Last Friday I finished up a freelance project that lead me to daydream about Iowa’s mid-19th century railroad schemes. I followed up on an ad circulated through our department’s listserv to make contact with an independent researcher out of Missouri. His personal intrigue led him on a quest to develop a very specific research inquiry: What details can we track down regarding Iowa’s first railroad venture?

His question was actually even more specific than that, giving me a firm understanding of his research goals (i.e., making my job much easier by narrowing my scope of work). I’d like to keep those details quiet in case he pursues publishing his findings. He contracted this work out to save him a trip to Iowa City and The University of Iowa Special Collections. The archives held the manuscripts of Charles Wood Irish, who was hired as an axman for this 1852 railroad project.

If one has all the time and money in the world, it’s fun to let the research take you where it will, but given the reality of time and budget constraints, the narrower the research question, the more efficient working with primary sources becomes. I only put in about 15 hours assisting him with his research, but that was enough to teach me a few takeaways and strategies for freelance researching.

I searched through the archives, microfilm of early Iowa newspapers held at the Iowa City Public Library, and the internet. Initially, he only asked for assistance with the Special Collections holdings. I had to pitch the idea of moving the search to microfilm after it seemed unlikely that the manuscripts would hold the answer to his question. The challenge here was having to communicate and negotiate via email about the project’s needs. Is it better to move forward with what you think is best in order to save time, or is it better to wait for your client to give the green light to ensure you can include those hours in your invoice?

A second challenge that cropped up involved time management. The research may only take 15 hours, but when it spans over two weeks, what sort of mini-milestones and deliverables can you set to maintain progress and not let inertia set in? For me, my milestones followed the types of sources I searched through. Exhausted the potential usefulness of the archives? Check. Covered this set of years in microfilm? Check. Anything we overlooked in Google Scholar? Check. I did feel like I wasn’t emailing him reports at regular enough intervals, but that’s also a question of time. Is it better to allocate time to emailing or is it better to wait until you have definitive results?

A final challenge I’d like to describe is one involving money. I’ve been told that former SLIS students performing freelance research duties for outside researchers put in their time but were not compensated for it. I have no details other than that, so I can’t presume whether it was a communication issue or a client issue or what. Because I set enough free time aside for random projects this summer, I have less to lose if someone freeloads on my freelancing. (However, on the flip side, the side where this is my only income this summer, I have even *more* to lose. But I’m choosing to take the less-stressful perspective here.)

One of the harder things about freelancing is asking for your paycheck. It’s better to make sure time and budget constraints have been communicated up front. As the person on the labor end of things, I felt it was my responsibility to ask what my client’s expectations were. He knows what rate he feels is fair for this kind of research. So how much time does he want spent at that rate before re-thinking his research question?

After the budget was set, it was easier to draw up a mental scope of work (SOW) for the project. I had noooo idea what a SOW was before my last job working for an education policy subcontractor. Now I can’t imagine working on anything without one. I haven’t written up a formal one in a while, but they are invaluable when it comes to envisioning the larger scope of the project and what individual steps are needed to advance that work. My LIS coursework often involves working with parters for a grade, and I find a basic SOW helps reach the project goals for my classes, as well.

If another freelance research project like this comes up, I will consider drawing one up for even clearer communications. My deliverables for him were unknown at the beginning, and that created some discomfort for me. How do I know what I report back to him will be satisfactory enough to ensure compensation? An upfront SOW may have alleviated that concern. On top of a couple of email reports, my deliverables turned out to be the following:

In the future, I may start by surveying a client to create a concrete list of deliverables, instead of letting them randomly come up when I think X might be useful.

I really enjoyed the opportunity this project gave me. The topic was of interest to me because my grandfather worked as a Union Pacific railroad employee, and I spent time at the UP museum exploring railroad history as a kid. I grew up on the Missouri in railroad country, and it has primed me to be fascinated by pioneer history.

But also, as a library student (and nerd), spending time looking at archival materials is thrilling. I love reading 19th-century letters penned in thick ink. The personal is poetic.

And exploring microfilm lets me reminisce about my time as a journalism student, thinking about reportage standards and practices in a burgeoning field. As a writer, I can appreciate this man’s passion for the past. Here is someone with not just a need but a desire to answer questions and tell a story that has been neglected by the greater populace’s consciousness.

Both my client and I are very happy with the results of this research. Again, the librarian-researcher relationship proves fruitful.