In the fall, an LIS foundations course of mine delved deeply into the discussion of librarian stereotypes. The books and articles we read gave us several prototypical examples. In chronological order (according to character described, not era written about in) here are the biggies that stood out:

I have all these cultural images of the “librarian” in my head as I get into the thick of reading H. P. Lovecraft’s “The Dunwich Horror.” To my delight, the hero-protagonist of that story soon proved to be the head librarian at Miskatonic University in Arkham. He could be compared to the male academician of Woolf’s story–the two stories are both discussing the same era and were conceived and published then. But while the Woolf character was described as an unpermissive gatekeeper (not the positive kind), Lovecraft’s librarian, Dr. Henry Armitage, saved not only the townspeople of Dunwich but potentially the entire world. How’s that for a librarian’s work? 🙂

Being an MLIS student really brought joy to reading this tale. I can get a bit bogged down with all the negative associations with the term “librarian” and think the re-branding efforts can seem really forced sometimes. (See “Info Pro: Adopting the Tools from the World of Business Consulting,” from the January 2011 issue of American Libraries.  If I were to turn in an article like that to my first journalism writing class, I would have gotten an F for using too  much jargon. Red-inked edits would be everywhere.) 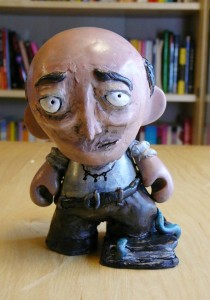 Our Lovecraftian librarian here is full of knowledge, courage, and curiosity. That is something positive that I could really identify with. Armitage is an obsessive reader (of a diary written by an otherworldly creature), and although he’s an authority, he uses his librarian power to prevent this barely-human Wilbur Wheatley from checking out the ancient tome that would allow him to raise up inconceivably monstrous ancient ones.

Armitage can decipher codes, too, and throughout his scenes he is continually stricken with feelings of grave responsibility. He is weakened by several days of not eating while obsessively reading the maddening text, but hey, he is 73 years old, after all.

This story gives me new hope for that term. From now on when I think of “librarians,” I will not settle for images of the tattooed and pierced. Rather, I will look at librarians as if each of them had the courage to investigate and prevent the “hellish advance in the black dominion of [an] ancient and once passive nightmare.”

Don’t have to let down the bun for that.