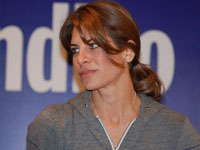 JM at an Unlimited book signing. Thanks to csztova for sharing via Flickr.

Jillian Michaels has had a lot of appearances lately in the magazines I read, and when I saw her new book, Unlimited, displayed on a shelf at the Iowa City Public Library as I was browsing, I decided why the hell not?

Normally, I would not want to broadcast that I had started reading a self-help book, but something caught my attention that I don’t want to keep quiet about. Her dedication in the front of the book gives a shout-out to Suze Orman and her partner, calling them her “two mommies.” Uh, that’s cool, Jillian. Didn’t know you were so liberal.

Then I read her acknowledgements. She gives an indication of a partner, but without revealing a gender.

I thought back to the magazine articles I read about her (in Fitness and Shape, specifically). These magazines on the whole are notorious for asking celebrities about their relationships, but the JM pieces I read were absent of that except for mentioning that she wants to adopt. One reported that she hates trying on bikinis. Most women would kill to be trying on bikinis having her kind of toned body.

She advertises so many products with the image of her chiseled figure in a two-piece, catering to an audience who either wants to be her or to do her. And she’s not out to her audience.

After explaining who she was and ranting about this new discovery to my partner, I had to explain why this troubled me. I was arguing that she probably has to stay in the closet because her fitness products wouldn’t sell as well if people thought she was queer. He said, “Well, now the new fantasy could be…I’ll follow her program, get fit, and be the one to straight-en her out.”

This is offensive to me because if these magazines are going to grill straight women and men about their love lives, why the hell can’t Jillian Michaels be free to express her love and gratitude to the woman who’s been emotionally supportive to her throughout her stressful work life? Organized action efforts like the Day of Silence were created to call attention to the silencing of gay people and their identities–and it was created for high school students. JM is 37 years old and her experiences have been silenced.

Another reason this masking of gender preference is wrong is that people who can’t read the hints and clues won’t ever be forced to deal with it. Putting it another way, I consumed several articles, internet videos, and the opening matter of her book (which many people don’t read, I would guess) before I understood she was gay.

People who don’t figure it out will continue to normalize her and assume she’s just a straight woman too busy for a man so she has to adopt. I’ll liken it to assuming every light-skinned person around you is White. (I’ve used this comparison a lot but it’s an important one for me.) If you’re wrong, that person’s experiences as a person of color go unacknowledged and unaccepted.

If you assume every long-haired woman is straight–especially if they’re asked to wear a certain dress for the cover of a magazine–then those who aren’t have to work harder to enjoy themselves for who they are. And you lose out because you close yourself off to learning new ways of enjoying life. Oh, and you also might be an asshole for forcing those different from you to conform to your myopic view of the world.

My biggest issue is that Suze Orman can be out and sell financial advice, but Jillian Michaels can’t be out and sell fitness advice. Her book is titled “Unlimited,” but my guess is that she herself feels very limited in this area. She has to do her best to perform a feminine gender, whether she enjoys trying on bikinis or not. She just came out with a clothing line. Are the heteronormative women who read these mainstream magazines going to purchase her K-Swiss collection if they think those are clothes for lesbians?

I love the inspiration I get from these magazines, but I really don’t need any more consumer-based femininity forced on me. Fitness news should focus on fitness news, not information to consume only in the pursuit of being sexy to snag a man.