Home › life › What running did for my resolutions

What running did for my resolutions

Anyone would ask me what my New Year’s resolutions was over the last few years would receive a very noncommittal and sarcastic response. It wasn’t my thing to think up grand visions of the person I thought I should be. I must have even offended my boyfriend with my flippant comments about it–he said something last week that led me to realize how ugly my insincerity in past years was.

I’ve grown up quite a lot, particularly in the past year. I faced potentially losing my day job, worked on a $200 million competitive grant application for the State of Iowa, retired from my 4-to-5 -year editing relationship with a local magazine, chose to take the leap and start a master’s program, and then finally let go of my day job. 2010 was for me filled with changes and new adventures. In 2010, I also learned how to make goals. 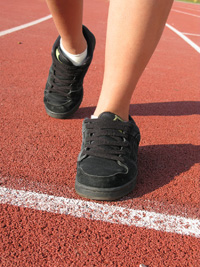 Training for one thing may lead to improvements in other areas as well.

I’m not talking about goals imposed by others–bosses, friends, teachers, etc.–but those created and defined by me and me alone. I do identify with Taoism in wanting to go with the flow of everything and bend instead of break when challenges arise. The passivity that goes along with that hinders self-determination, however. It grants permission to let others decide for you what your priorities are.

I started working out a couple of years ago and despite the very goal-oriented nature of exercise programs, I could not commit to anything specific. I became a new member of a gym and when I met with a personal trainer (one meeting came with the sign-up package), all I could tell him was that I wanted to eat better and exercise more.

Two years later, I can finally state explicitly what the plan is, what my goals are, what my New Year’s resolutions are and how I’m going to achieve them. I attribute the change to picking up running. My elliptical workouts became unchallenging and I was hearing a lot of buzz about the Couch to 5K program.

Running a 5K race was a goal agreed upon by myself and two others, but our workout plans never quite fell in sync and eventually my goal became “be able to run a 5K.” The C25K podcast laid everything out for me so I didn’t even have to think about it. No time for waffling–just walking and running.

I also began listening to podcasts about running–Running with the Pack being my favorite–and found inspiration in the audiobook What I Talk About When I Talk About Running by Haruki Murakami, which I downloaded from the public library. I love hearing how experienced long-distance runners compare running and life. How big picture challenges can be broken down into steps and handled day by day.

My resolution this year is starting simple again. Still not willing to commit to year-long changes, here’s what I’ve got planned:

So they’re all health and fitness related. The other goals I have (get through 100% of the assigned readings for my spring courses, find work for summer, write one blog post each week) are not quite resolution-worthy just yet. Those sorts of things require that Taoist flexibility and adaptation that I’m so good at.

For now I just need to get through this first challenge to be able to create my next goal: my Chinese New Year’s Resolution.