Home › life › My Life with 5 Fingers: Review and progress update

My Life with 5 Fingers: Review and progress update 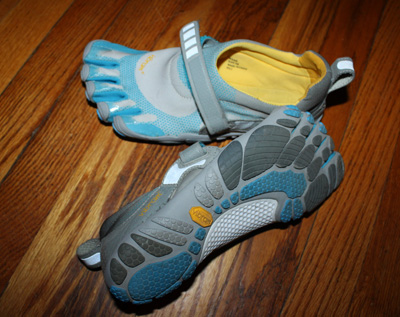 Because strong calves are sexy calves

Five weeks ago I purchased a pair of Vibram FiveFingers shoes, in the Bikila style. The company promotes these running shoes as being designed to support “a more natural, healthier and more efficient forefoot strike.” As in, you could also run barefoot.

I didn’t buy these shoes because I became enchanted with the barefoot running movement (advocates might point to the number of Kenyans who have won the Boston and New York marathons, as if no Kenyans have shoes). I bought them because they were super lightweight and would take up minimal space in my bag that has to hold everything from a laptop to a fat database textbook to my lunch and workout gear.

But instead of just carrying two bags, I decide I better change the way I run.I did convince myself that if I changed the way I run I might get faster. On the treadmills at the gym, I found my gait is heavy and I practically stomp when I run. Having to tread lightly might help me increase my cadence, which running experts say is crucial to improving speed. Plus, another FiveFingers owner reported getting a great calf workout when she ran, and who doesn’t want sexy calves? Calves are totally underrated when it comes to sexy body parts.

Five weeks later, I’d say my calves are working their way to sexy. My running speed, on the other hand, is still limping along. Online advice says to break the shoes in (or break your body into the shoes) slowly, starting out by running 10% of the distance you can run in cushiony running shoes. Still considering myself a beginner at 10 miles per week, that would put me at a measly 1 mile run starting out. That’s no way to continue building up one’s cardio capacity.

It’s also no way to continue building up confidence. When I was still running in the cushiony running shoes, I was confident running 8mph sprints, even pushing myself to 9mph bursts. Given that running was the last thing I ever ever ever wanted to do as a kid, only building up to a 5k distance last year, an 8mph sprint was a miracle.

Starting out in a pair of FiveFingers, no bursting is recommended. It’s a sure way to overdue it and be in lots of pain. I started out at a mere 4.5-5mph speed for 2 miles and was hurting. Over 2 runs this week, I’m now done about 5 miles and am going to try for another 2 after giving myself a rest day.

The shoes themselves are fine. They are horribly awkward to try on in the store while an attendant looks on. I worked up a sweat just tugging and shoving and pulling and adjusting them. (I’m not kidding–it was 80 degrees in there and I had to remove layers to comfortably struggle with these shoes.) I like how snug of a fit they are once they’re on, but after a run, I want to immediately pull them off to let my feet cool off.

They are fairly comfortable just to walk around in, but I wouldn’t recommend standing for hours on end in them.

My gait seems to have improved, and today I had my best run ever, walk/run/sprint-ing for 30 minutes over 2.7 miles. Honestly, running outside in these shoes has given me more confidence in my capacity for speed and distance than running on a treadmill. As I’ve been focusing on my gait this whole time, an outdoor path has proven less constricting, and I feel more freedom to move and change up my stance than a treadmill allows.

Putting the shoes on has also gotten much easier. Whereas it took me 10+ minutes to get them on in the store, now I slip them on in the locker room without fear of people gawking.

Plus, the shoes are fun. They make me feel like I’m a runner just by wearing them (not that I need to prove it to anyone, including <gulp> myself).

But where the visual appeal and gym cred score well, feelings of progress suffer. The biggest drawback of choosing these shoes is taking a hit to personal distance and speed successes. What would I say to someone thinking about buying a pair of Vibram FiveFingers for running? “Yeah, they’re cool, but, be prepared to start over.”

Starting over–both on the capacity level and the confidence level–is easier said than done.

EDIT: After I posted this, I found some videos through the Twitter #barefootrunning hashtag that Merrill produces to promote the trend and the shoes it designs and produces to cater to the barefoot running audience. Some of these are worth checking out.

4 comments on “My Life with 5 Fingers: Review and progress update”